Production of the VW 181 starts in September 1969 with vehicle number 180 2198 169.  The original design includes 4 removable doors with window inserts on top.  A black vinyl (unpadded) top which can be removed.  Foldable front windscreen.  Front defroster vents in the dashboard and warm air outlets in the foot well.  The engine fitted was the single port 1500cc engine from the VW Splitscreen Bus which in the VW 181 produced a top speed of 110kph.

In August 1970 the engine was upgraded to the Twin Port 1600cc engine from the 1302S Beetle.  The extra 6bhp produced by this engine increased the top speed to 115kph.  Other improvements to the VW 181 in 1970 included a new padded dashboard and new improved windscreen mounting.  The bonnet release was moved to inside the glove box and the indicator switch was replaced with the version currently fitted to the Type 3 Variant.

No changes made.  First VW 181 was sold to the American market.  Named ‘Thing’ It was exported from Mexico to the USA for sale by Volkswagen of America.

From chassis number 183 2346 525 the rear suspension and braking system was changed from the original version fitted from the Splitscreen Bus (with reduction boxes) to the all-new Independent Rear Suspension (IRS) from the 1302 Beetle.  This new suspension included a double-jointed rear axle with semi-trailing links.  The rear brakes were off of the 1302 Beetle although a unique wide 5 brake drum was used (the Beetle brake drum was 4×130 PCD).

In August 1973 more parts from the VW Beetle were transferred to the VW 181.  This included the new 4 spoke steering wheel with padded horn push.  Indicator switch and column mounted wiper switch with integrated washer switch. 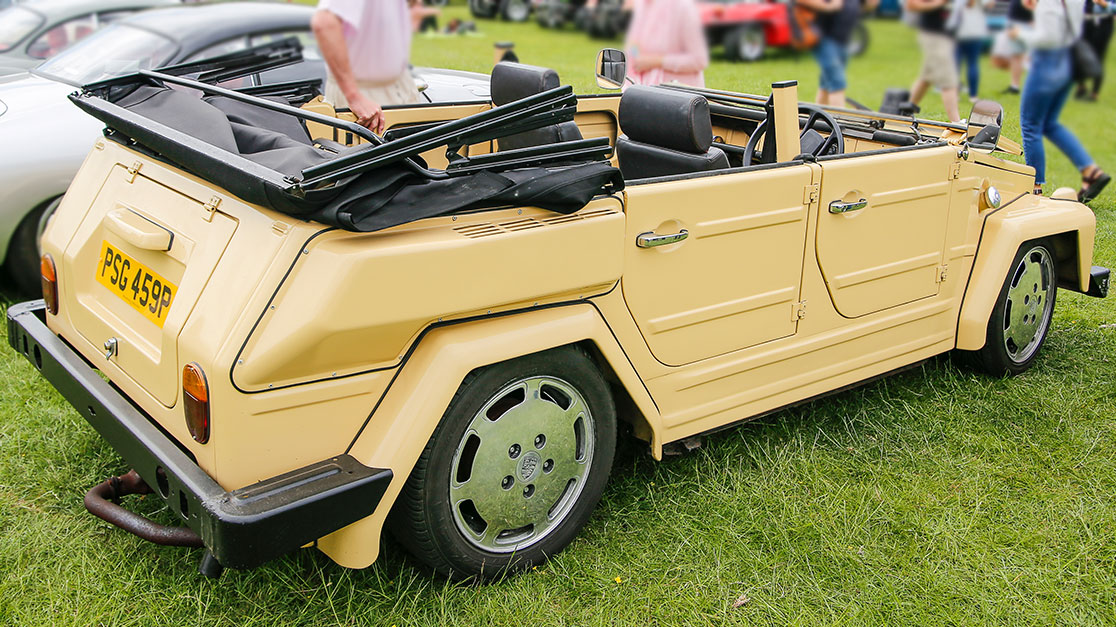 In March 1974 a new ‘Acapulco’ beach version was released into production (although not available in Germany).  This unique model included a new blue and white gloss paint with matching seat upholstery.  The running boards for the first time were covered in rubber and the safety chains were removed from the doors.  Only 400 were produced making them the rarest of all Type 181’s built.

No changes made. Sales prohibited in the USA due to design not meeting crash testing standards for passenger cars.

No Changes made. Production of the VW 182 (Trekker) was abandoned due to only 300 being imported into the UK over 2 years.

No Changes made. Production ends in Germany