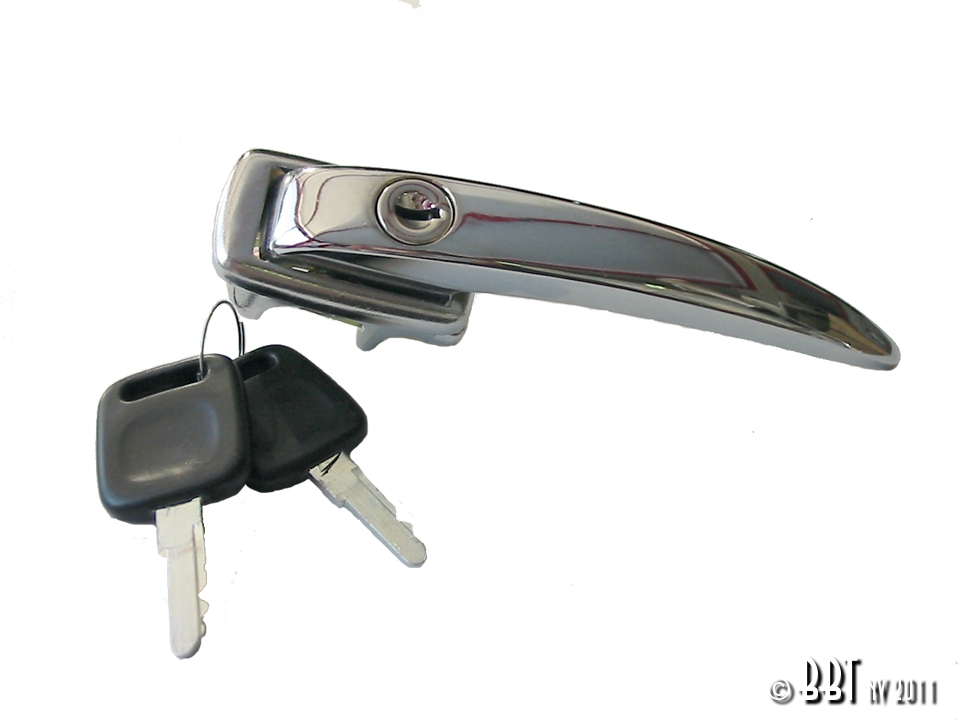 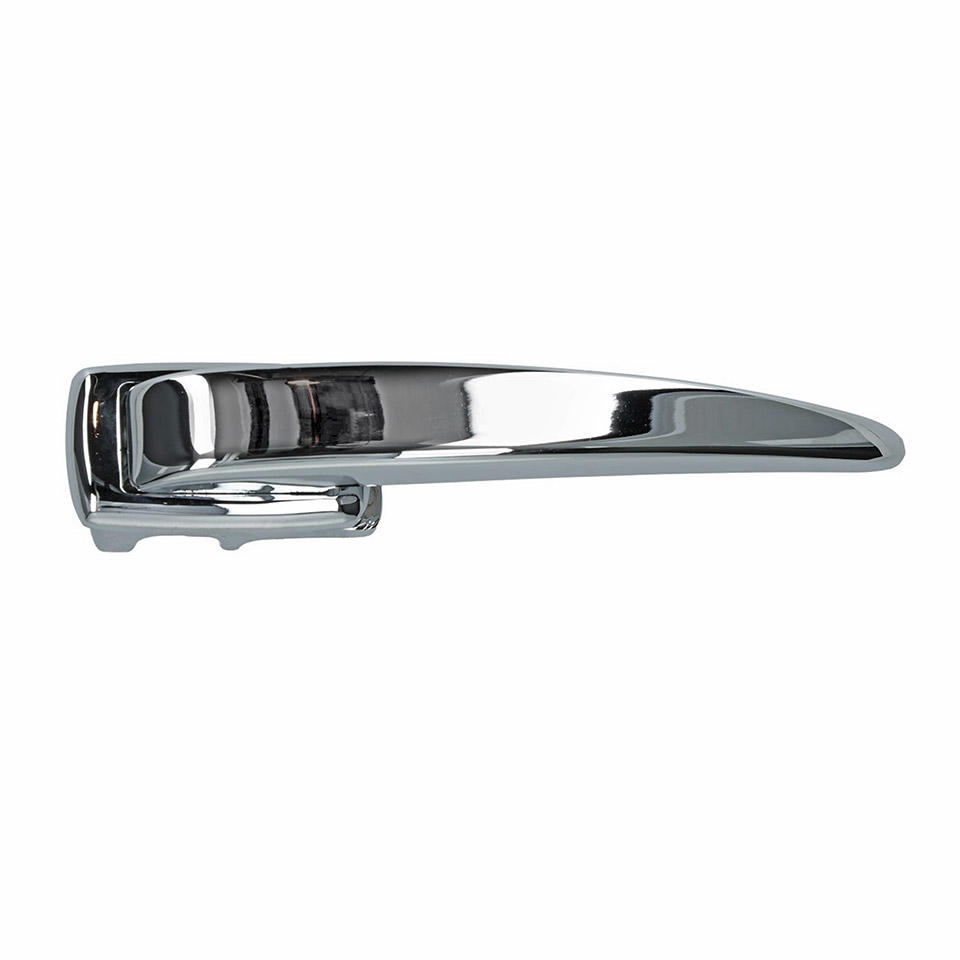 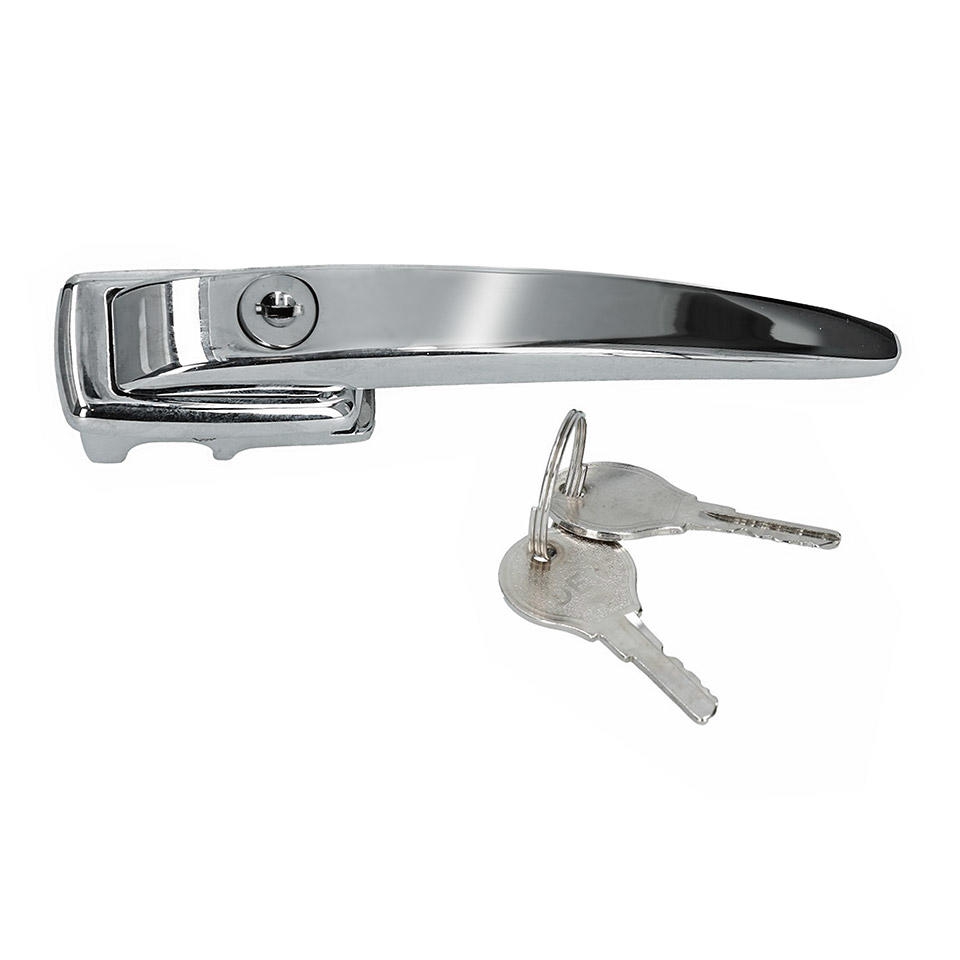 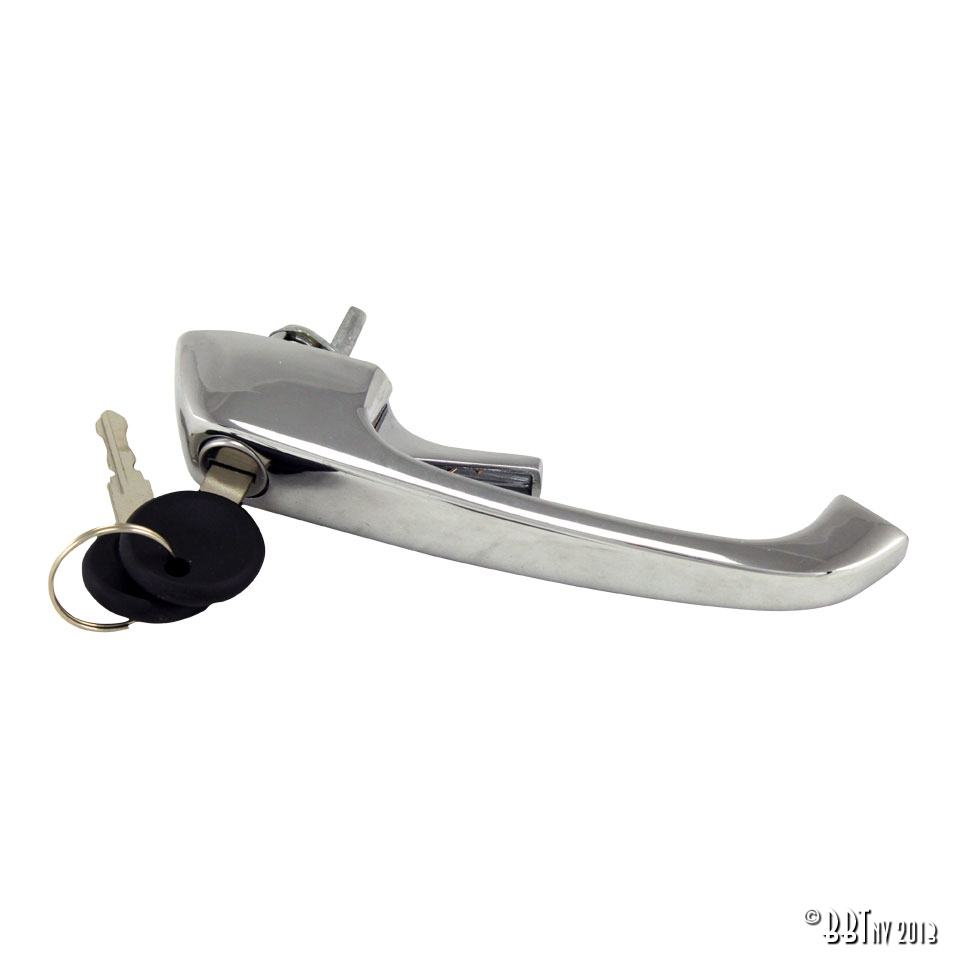 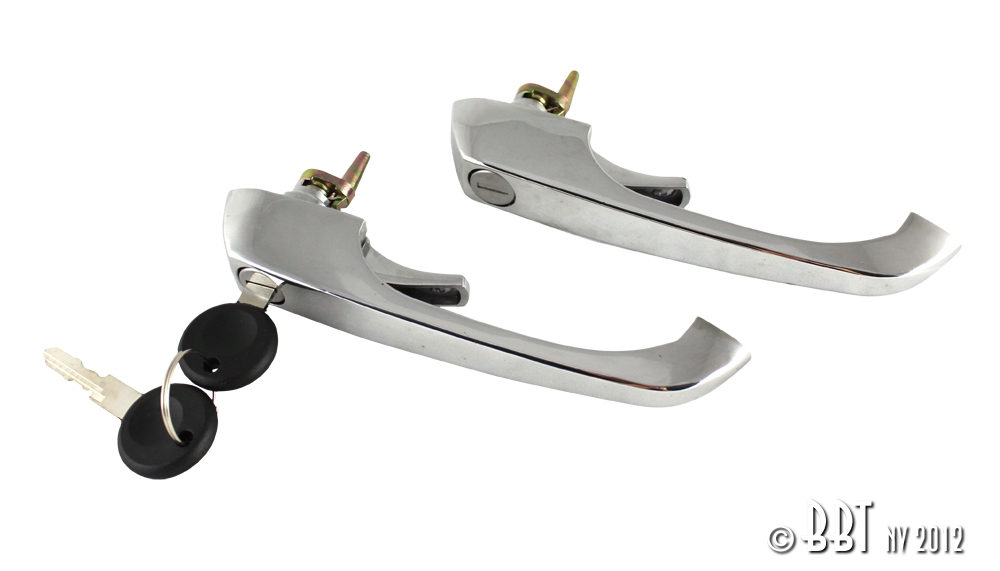 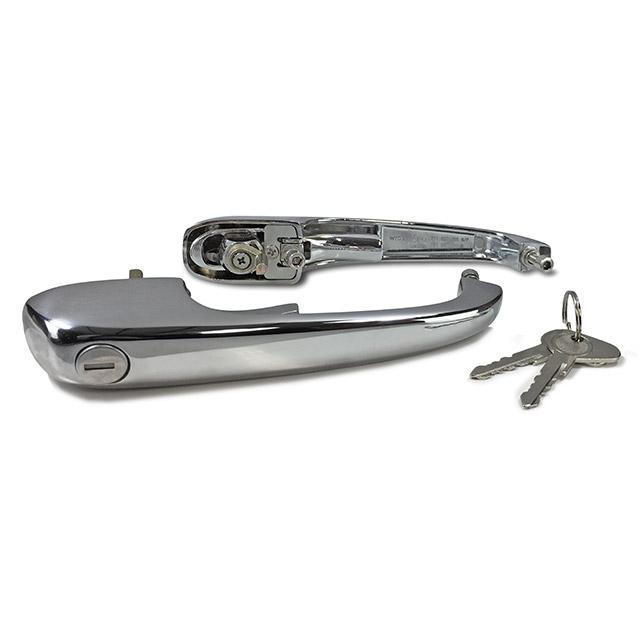 In January 1964 this handle design was replaced with a push button style door handle that had a round button.  The door handle was now fiexed to the cab door at both ends and a key hole was installed on both drivers and passenger door handles.  By turning the key the button was locked in position stopping the button from being pressed in.  Due to the larger size of the door handle a recess was also placed into the Cargo Door panel so that when the Cargo Door was opened it did not damage the panel.

In August 1968 the Baywindow Bus was fitted with the third design in cab door handle.  The first year of production of the Baywindow Bus was fitted with the same handle as the later Splitscreen Bus style.  This new design would see the button replaced with a trigger on the back of the handle.  The key in these handles for the first time would actually lock the door mechanisim itself instead of locking the door handle which made security of the Bus much more impregnable. 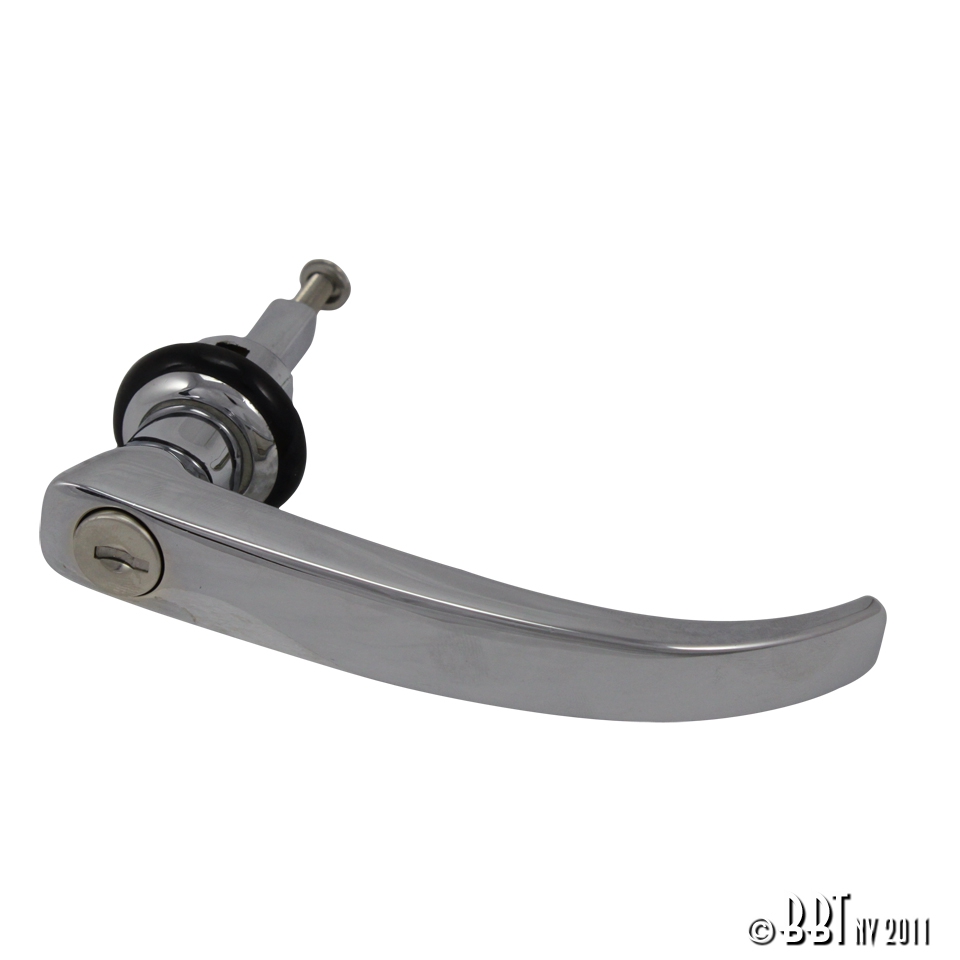 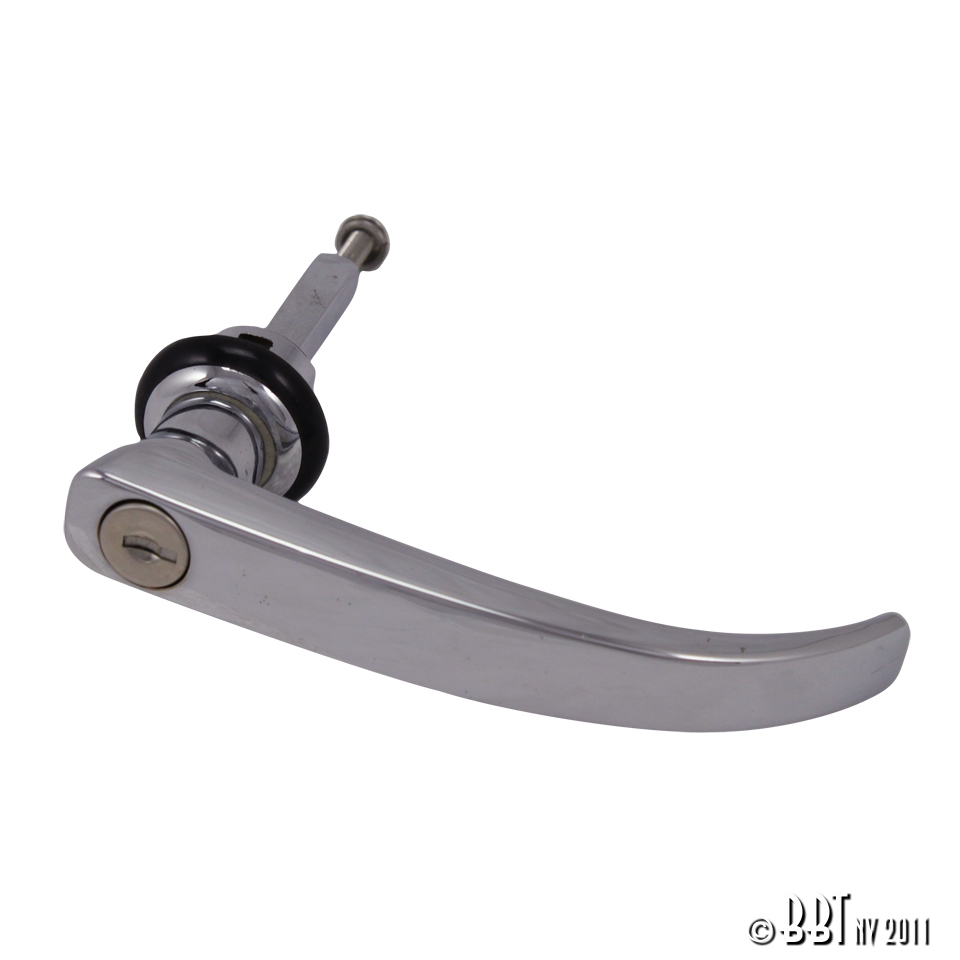 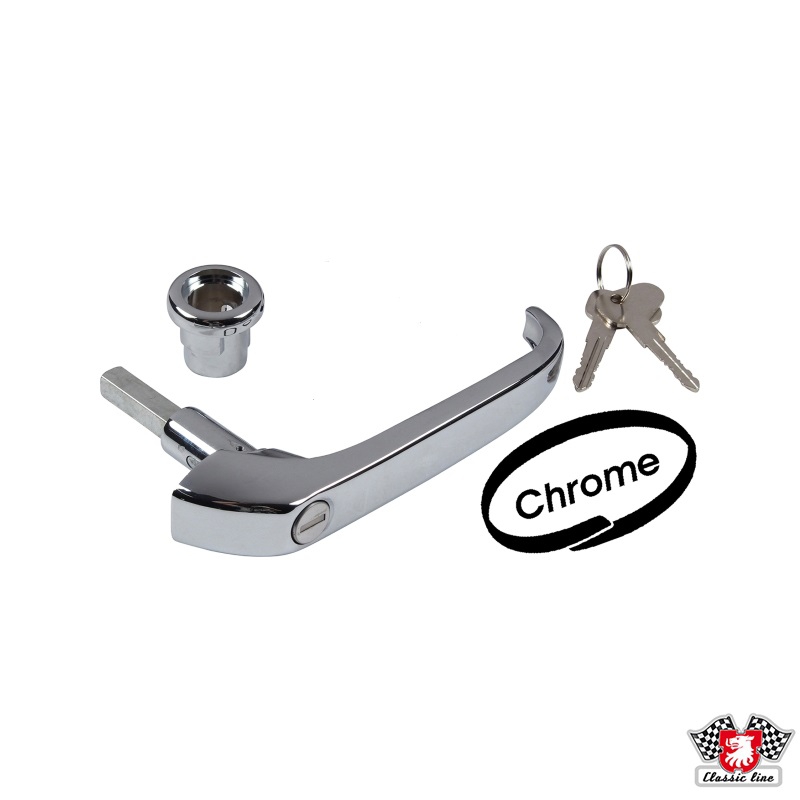 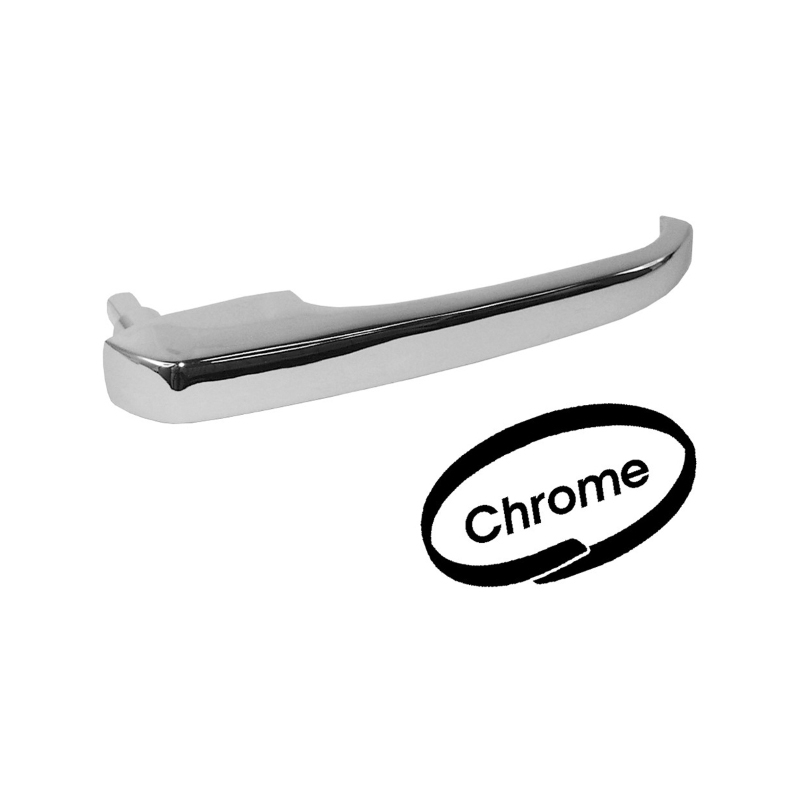 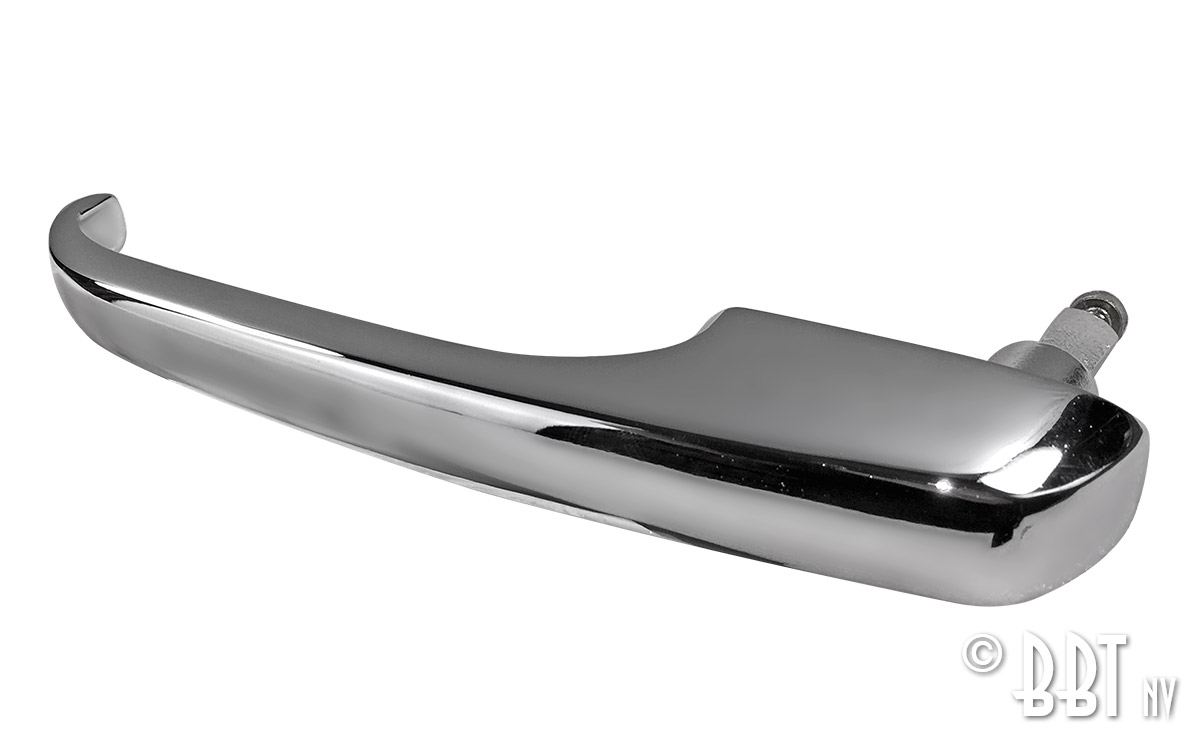 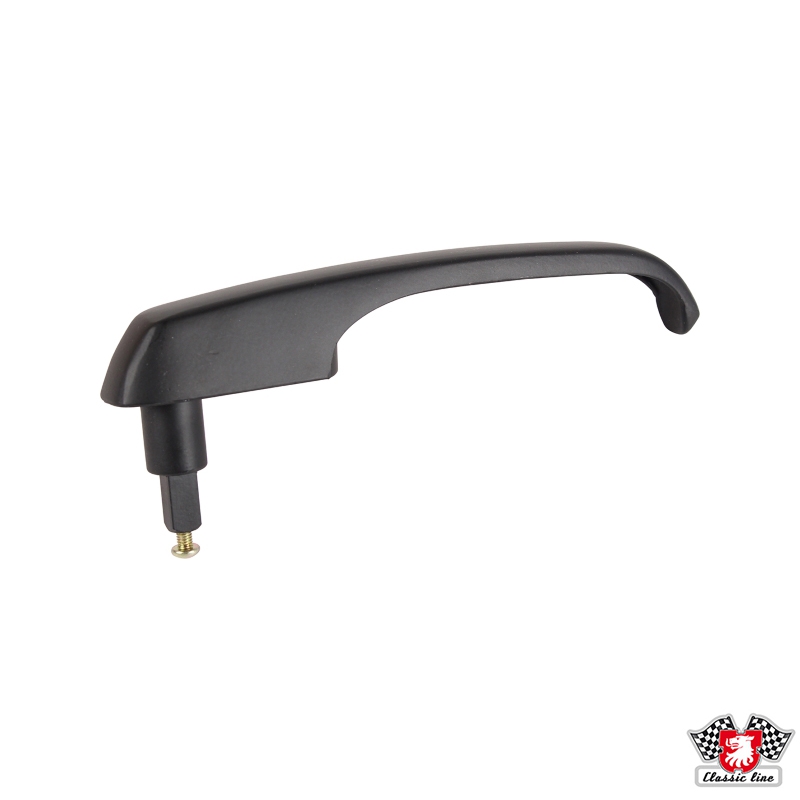 The first Cargo Door Handle style was installed on all Barndoor Buses.  It included a larger escutcheon below the handle which incorporated the lock for the handle.  This lock had a chromed sliding cover over it to stop dirt and water from entering the lock.

In March 1955 the lock was moved from under the handle into the end of the handle itself.  This handle was more rounded in appearance and shorter in design than the later style.

In January 1964 a more squarer handle was designed which was slightly longer than its predecessor.  Because of the extra length of the handle for the first time a recess was put into the cargo door skin to allow the handle to turn.

Barndoor Buses were not fitted with a tailgate but an extra larger engine lid.  This is where the nickname ‘Barndoor’ comes from.  The lock on this engine lid was a solid T-Handle and quite chunky in design. 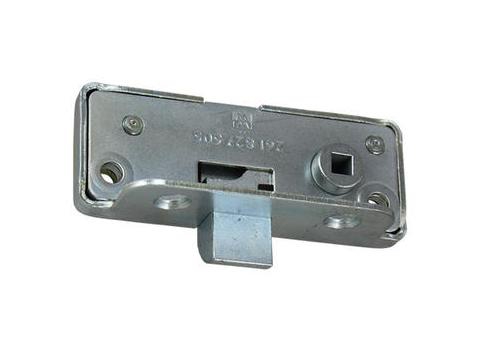 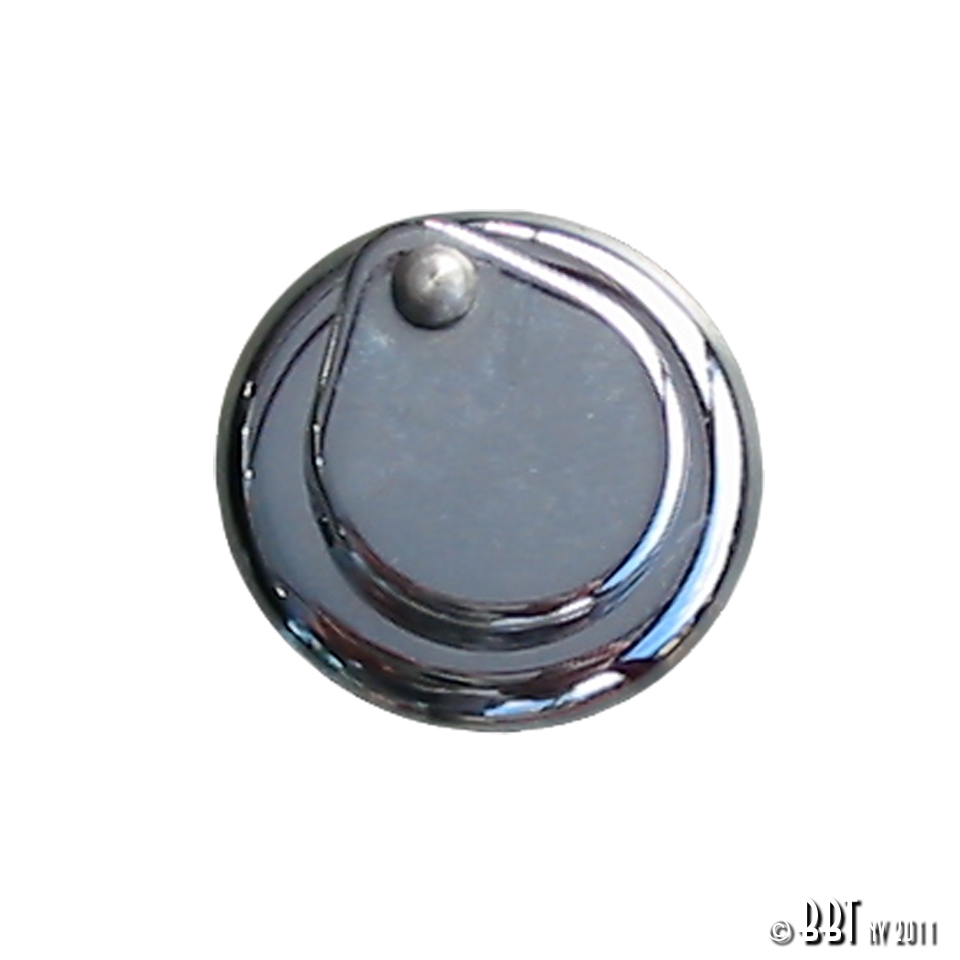 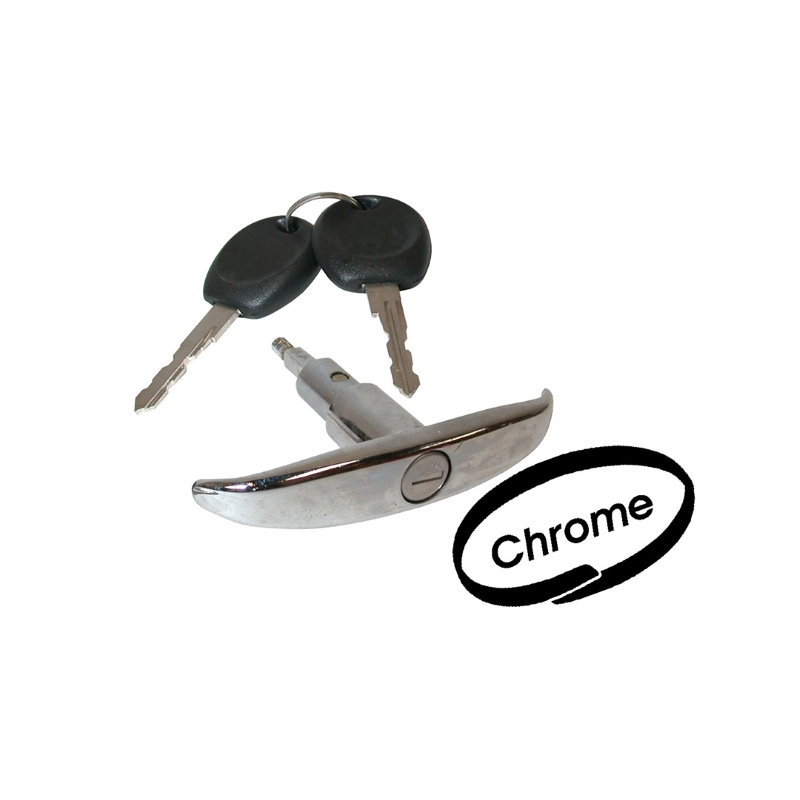 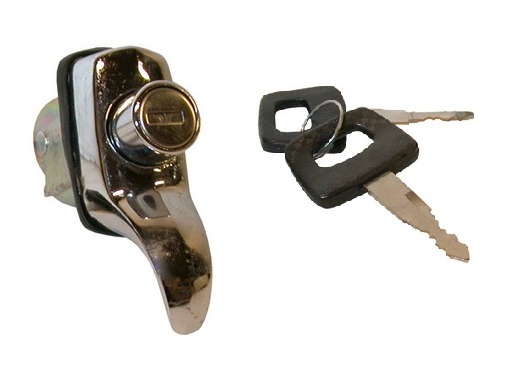 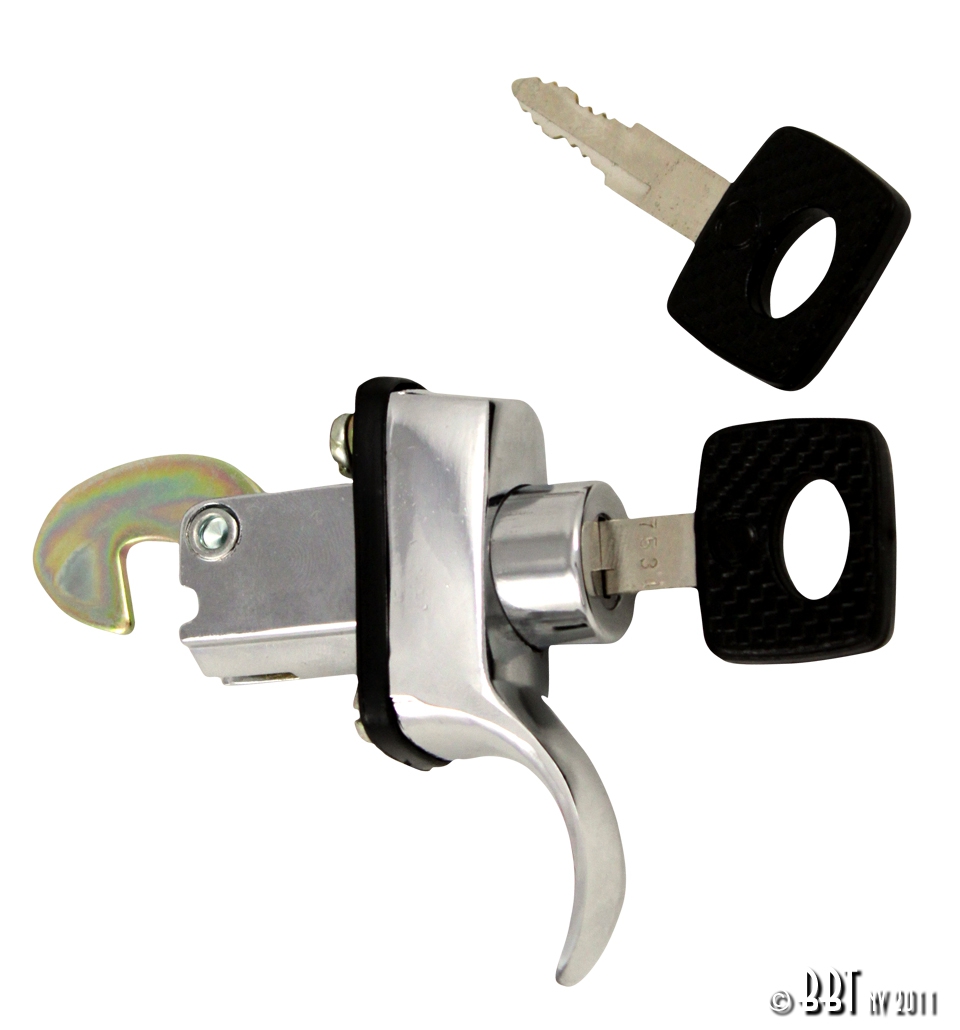 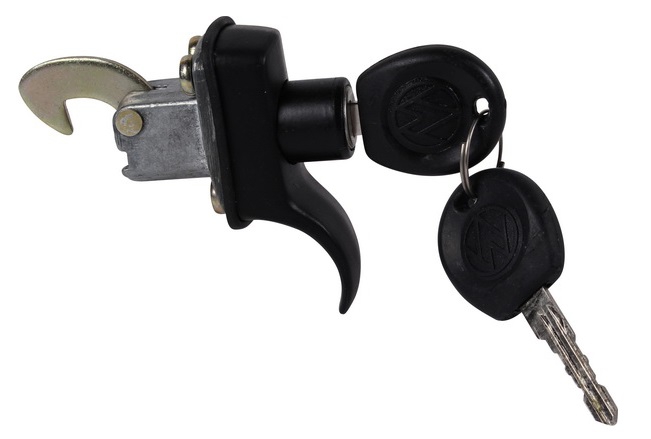 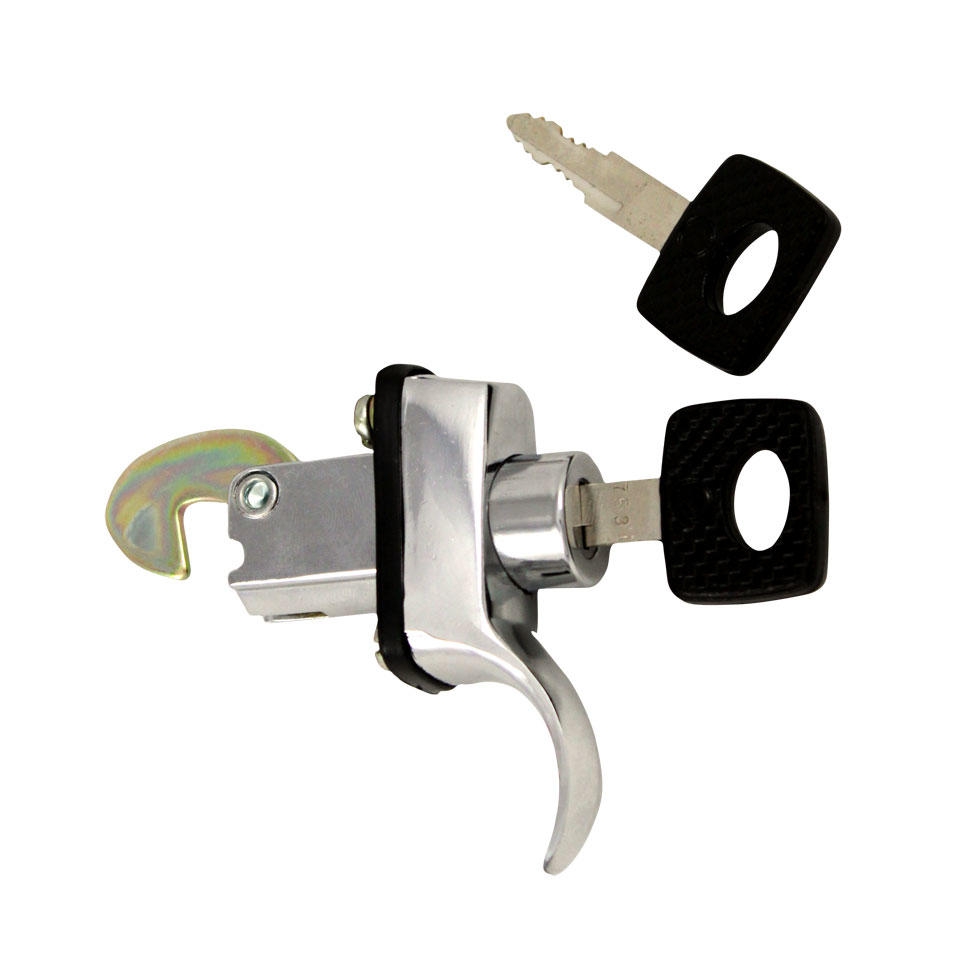 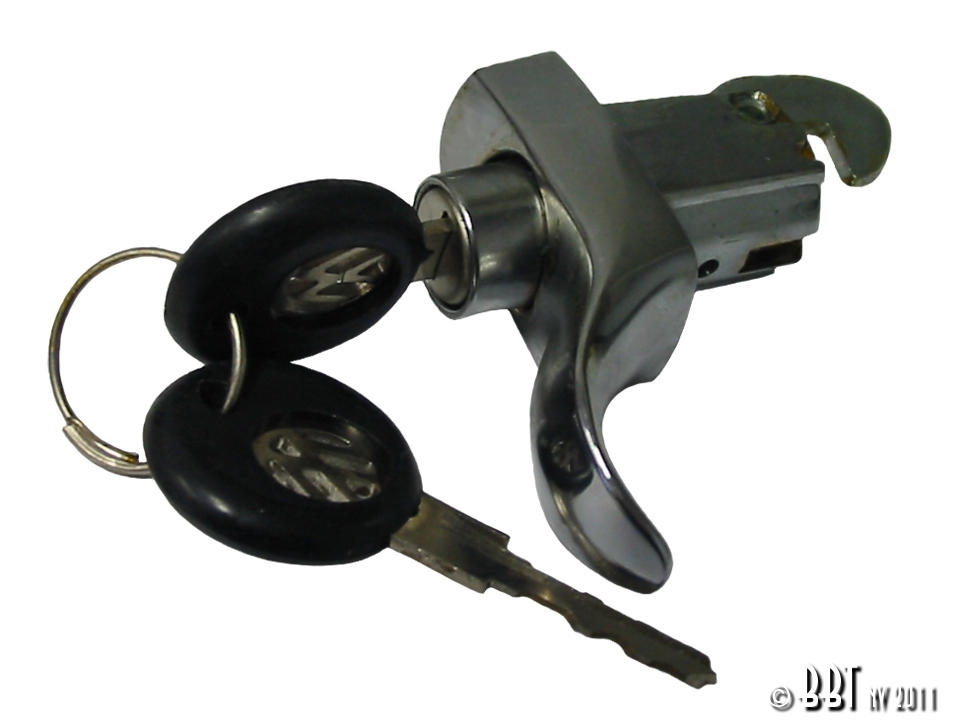 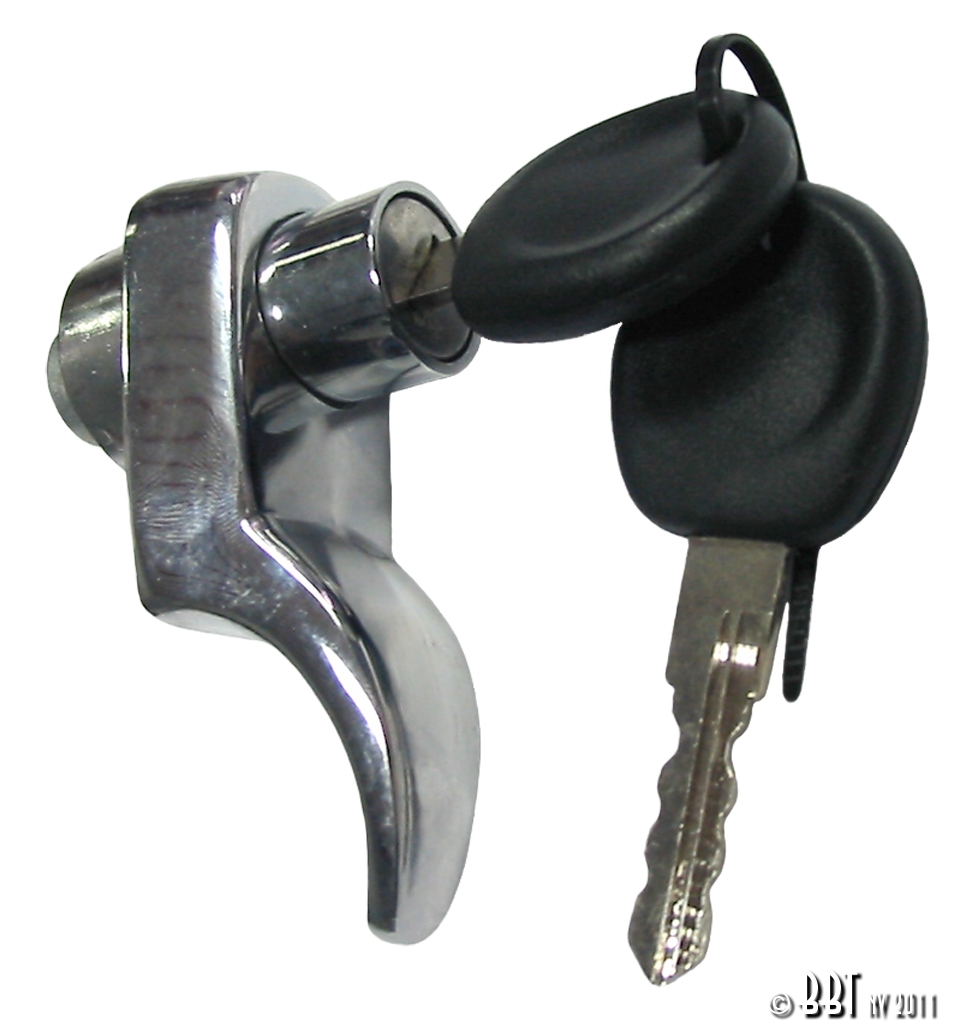 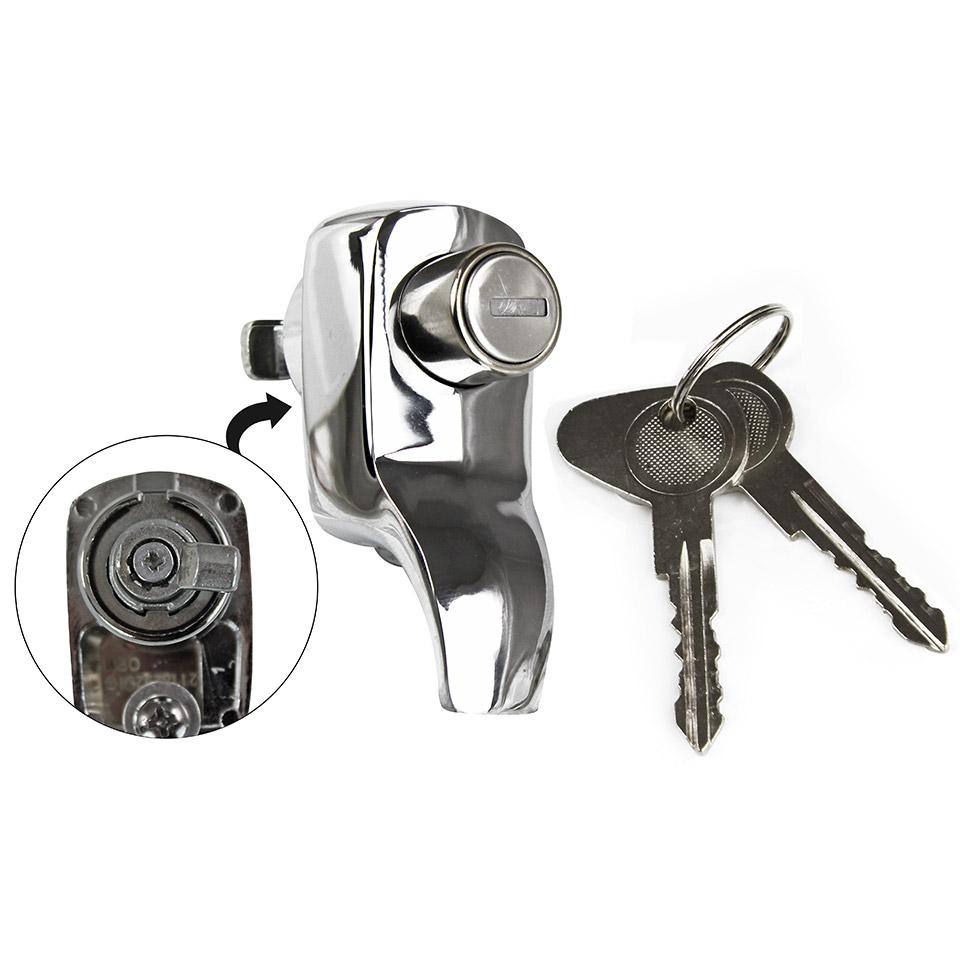 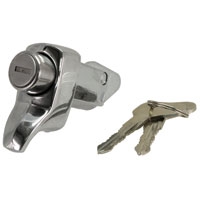 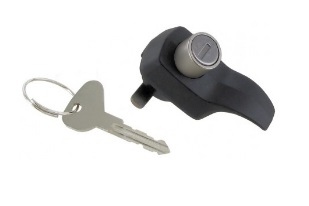 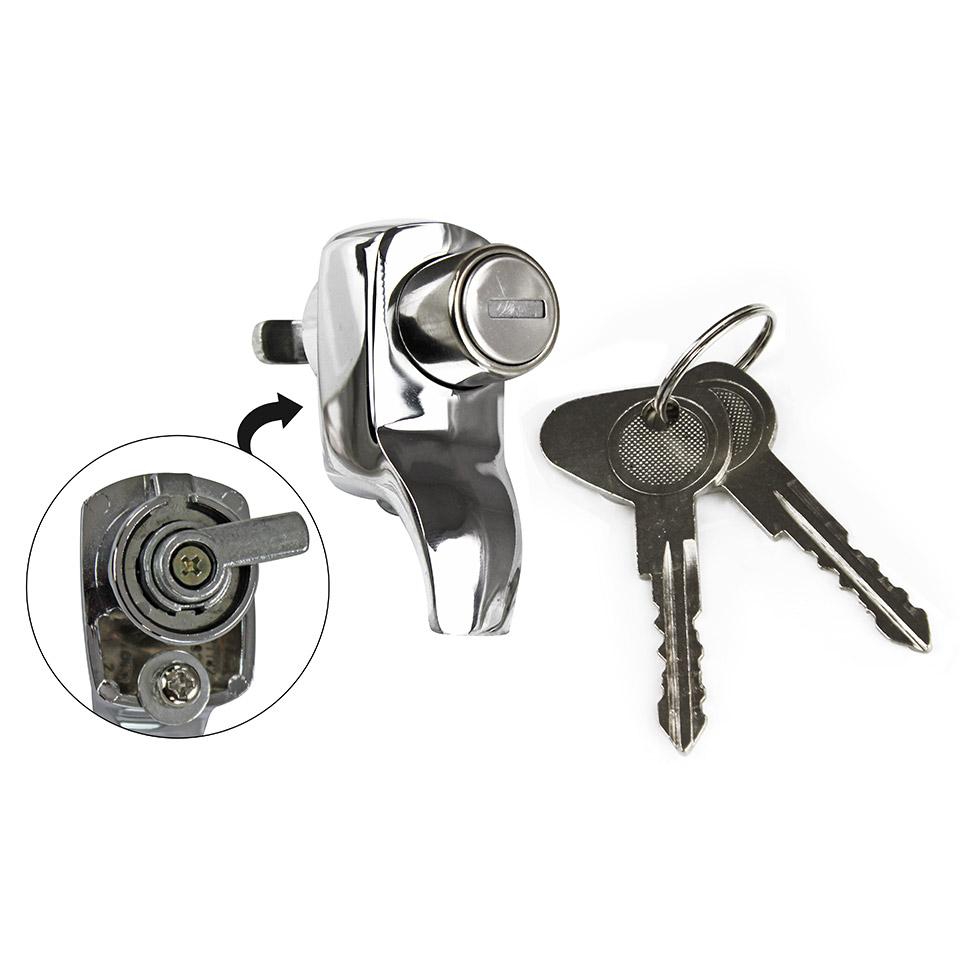 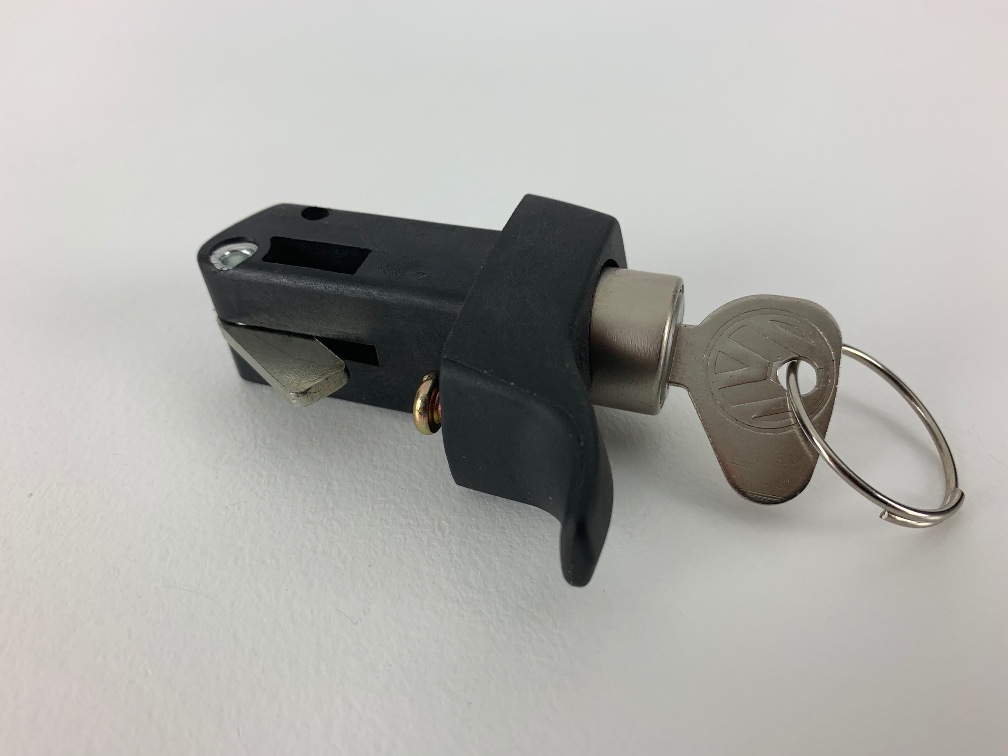 In March 1955 the first Tailgate was fitted to the Splitscreen Bus.  The T-Handle that was originally on the Barndoor Engine lid was moved to the tailgate a re-designed slightly.  There was more of a shape to the handle with turned back ends towards the panel.  The engine lid which was now separate was not installed with a handle.  Instead the engine lid was opened with a ‘Church Key’ which was inserted into a square hole with a sliding dust cover.

In September 1963 the tailgate handle was replaced with a push button.  The thin panel which separated the tail gate from the engine lid was given a finger indent so that once the button was pressed you could lift the tailgate up.

In September 1965 the Church Key lock on the engine lid was replaced with an engine lid lock incorporating a handle.  This style of handle was in fact the same as the Beetle Deck Lid Lock from 1964 to 1971.

In September 1966 the push button tailgate lock was replaced with a lock very similar to the engine lid lock of the same period bus.  Although still a push button lock it now incorporated a finger latch and therefore the recess under the tailgate was also removed from the design of the bus as it was no longer required.  This tailgate lock continued to be used on the ‘Early Bay’ Bus until August 1971.

With the introduction of the Baywindow Bus the engine lid lock changed in style slightly even though the tailgate lock remained the same.  The lock itself was removed from the push button.

In August 1972 the lock on the engine lid was re-designed to now incorporate the lock back into the push button.

In August 1975 the lock on the engine lid had the same shape and functionality but in order to save on costs was produced in plastic.

Guides   The VW Samba The VW Samba or Sondermodel (Special Model) was the top of the range Splitscreen Microbus... Read More

Guides   Barrels and Pistons We take a closer look at the barrels and pistons fitted to the VW Aircooled... Read More

Guides   Bus Tail Lights We look at the history of the Splitscreen and Baywindow Bus Tail Light Assembly and the changes in design throughout the years. Read More